After revealing the truth behind my lion selfie, I received a fantastic following of over 320,000 people from all around the world. I now want to take this opportunity to set a few things straight from my previous article, and give you more of an insight into my experiences undercover, and what you can do to help.

I went undercover whilst filming a documentary about responsible conservation in South Africa, for the Wildlife Conservation Channel.

During one of our interviews with an influential and well-respected conservationist, we were told about the conditions of the eco-park, which was en-route to our next destination.

Without hesitation, we immediately agreed that we should go undercover in the hope of exposing this awful place.

I have been asked many times to name and shame the eco-park, but unfortunately at this time I cannot. Please stay with me though, as the film crew and I are currently doing everything that we can to get the footage publicised. I will, of course, post our progress and updates on here as soon as I can. It’s a waiting game and a tough battle but I do believe we can win this one.

The most frequent question that I have been asked from the hundreds that have reached out to me is what we can do to help. In its simplest form, I believe that it is all about education.

I was quite frankly shocked at the amount of people who told me, both in person and through social media, that they had no idea that these sorts of things occur in these places.

In fact, I am so happy to say that I received an email from a travel agent in Canada saying that now that they are aware of the truth behind these places, they will stop sending tourists there – which is a brilliant step in the right direction.

Sadly it’s true, because of the sheer volume of animals, that people do not question that there is anything wrong with these establishments, and think that they must be helping conserve the species because of the amount of cubs that are being produced in these breeding farms, for example.

So the main thing that we can all do is continue spreading the message that this is NOT conservation.

A lot of these places do not worry about genetically ethical breeding. As their need for cubs is constant, many of them disregard such ethics, and so many lions are interbred with each other, resulting in many defects in the cubs.

And with the example that I used of the hyena cub that is currently residing with a lion cub to “see if they will be friends”, I ask you, as potential tourists to the eco-park, the same question I wish I had asked our “guide” when I was busy fighting back my anger… what would happen if these two cubs killed each other? To the establishment, it’s just an experiment that may not work out…oh well, on to the next one. 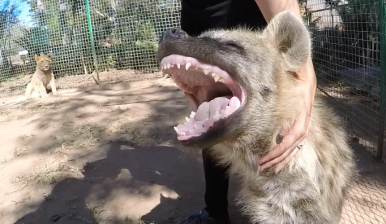 Sadly, there are so many places all over the world that are similar to the eco-park that I spoke about previously.

Here is a quote from the Chief Operating Officer of the ALERT project:

“The cubs born in our breeding centre [Antelope Park] are taken from their mother at 3 weeks old… Removing the cubs at this young age allows us to train the lions only to the point that they are safe for us to take out on walks from 6 weeks to 18 months old.”

If this is a statement that establishments are freely publicising, it makes you ponder what they are hiding that is much worse than this, doesn’t it?

Although it may not seem like much, the more awareness that we create about the truth behind these places, the less people will pour their money into funding the breeding of these animals, and the upkeep of these eco-parks, and they WILL get shut down.

After filming undercover we did in fact report the park to the NSPCA who are working on an investigation into that particular place along with the numerous others similar. With everything though, things take too much time. So while that is in swing, education is key; I cannot say it enough!

I’ve also had many people asking me whether the volunteer projects they are due to go on are similar to what I described in my article, and there are easy ways to spot those too.

I could go on and on but here are some quick and easy tell tale signs:

The main thing I would tell you before booking is to really do your research!

And the bad to feed the countless cubs they are breeding.

So do not just go for the ones who display photos of volunteers with cute cubs, and the cheapest price. Often by speaking to the staff at the reserves you will get a gut instinct about the place through asking the right questions.

And recognise if there is a changing of subjects and dodging around your question when you ask about the future of these animals. You should know by now what this means.

Think about it, if a company states that there will be cubs to look after, where have these cubs come from?

How can they guarantee that there will be cubs when they do not know what time of the year you are thinking of going. Why do these cubs even need to be looked after by humans? Where is their mother?

For me, the stories that I hear about people’s sightings of animals in the wild are so much more incredible, heartfelt and impressive than anyone saying they have stroked a lion.

When people ask me what the most incredible thing I’ve ever done is, I don’t say that I’ve stroked a hyena in an eco-park, but I go straight to the memory of seeing a heard of 20 elephants drinking from a waterhole, in bliss!

Now this is a controversial subject that I – and I’m sure many of you – could discuss for hours, and at this moment I am not stating whether what he does is right or wrong, but for me, the beauty in the footage of the Lion Whisperer Kevin Richardson, is the moment you see the lions running from the African plains to ‘hug’ him. The beauty is not merely in him sat next to a lion, but seeing that lion run from its natural habitat, into the arms of his once-surrogate father. Because it makes you realise the journey that they have both been on, and this lion may not have had a future at all if it wasn’t for Kevin.

By witnessing the king of the jungle and the majestic giants in the wild, amongst others, you are a part of history; the way things are currently going.

Remember that every single time that you pet a cub, you are giving reason for that establishment to breed more, you are fuelling the industry and leaving another lioness heartbreakingly pondering where her babies have gone.

Remember that a cub that is being used for petting is not going to the wild.

And now I need your help. To get this topic to the next level, I need to reach someone influential with my Lion Selfie.

Ricky Gervais has been an advocate for wildlife conservation recently. His tweets about trophy hunting educated so many previously unaware people.

So please, do everything that you can to get him to read ‘The Truth Behind My Lion Selfie’.

2 thoughts on “A response to my Lion Selfie”

A 2020 story. 💫 A new year. A new decade. I’d planned to create & upload a video on New Year’s Day about authenticity, but I didn’t even start editing it - instead I watched Christmas films & played card games with my family. I was then going to upload a simple image & write about enjoying the beauty of life, but I didn’t even have my phone & scribbled the caption on a piece of paper & then forgot about it. When I lived in Africa, I was told about the power of our intuition & how our modern-day reliance on social media & technology is blocking our ability to understand situations that occur around us for what they actually are. Instead, we have become distracted by believing that people’s best lives on social media are their entire lives, & our world has become a little confusing - often we have to disconnect to reconnect. This Christmas I was reminded of this after having an extra special time with my family, away from distraction, in the present moment. This year, this decade, I want to do things differently, & not be steered by what I think people want to see. 🌠So here’s so uploading content that inspires and motivates me, rather than what Instagram’s algorithm favours 🌠To nurturing friendships that mean the most to me 🌠To continuing to teach myself to paint & channel that creativity into every aspect of my day 🌠To setting aside time to continue with my dream therapy diploma 🌠To honouring the moon cycles & using them to help me understand what I want from life 🌠To saying yes to more opportunities 🌠To staying in the present moment 🌠To spreading love, positivity & calmness This image reminds me that, often, the closer we look & the more time we spend trying to understand things, the more beauty we start to see. & no matter how dark things sometimes seem, the sun will always set & when it rises, we can begin again. What’s your focus for 2020? 💫 #2020 #newyear #accordingtojess
I'm in the running for a Travel Blogging competition - fingers crossed for the judging in January! 🤞 If you want to read my article about one of my favourite nights in Africa, head to the link in my bio 🐾 I hope you're all having a wonderful #BoxingDay - it's the final #NewMoon of the decade which is the perfect time to zone in and set your intentions for 2020! 🌠 wish well and wish strong, it's going to be a brilliant superyear! 💫 #intentions #africa #southafrica #natureblogger #travelblogger #safari
Dinosaur or vulture chick? 🦅 Through photography this year, most of all I've learnt to have extreme patience - for unexpected events, the frustration of a whole load of foliage in the way of newborn animals, testing my abs & quads when standing in the most awkward positions for what felt like hours, and situations changing in the blink of an eye. 🦅🍃 🌠 Grateful for 2019 & every year for always teaching me to grow. #VulturesAccordingToJess #vulture #vulpro #growth #newyear #2019 #naturecapture #wildlifephotographer
Gentle souls, soothing presence, considerate beings, family values, unbreakable bonds, protective spirits. All the reasons why I adore elephants 🐘 #elephants #mammals #wildlife #animals #nature #naturecapture #natureblogger #africanwildlife
The beak of the lappet-faced vulture is on POINT! 🦅 This species of vulture is the only one whose beak can tear through skin, meaning they can open up a carcass that doesn't have any open wounds. This also means that other vulture species often have to mill around waiting for these kings to arrive before the feast can begin! #VulturesAccordingToJess #vultures #vulpro #birdsofprey #birdsofsouthafrica #wildlifephotographer #canoneos
Is it just me or does this lizard look like he's smiling? In my mind he's thinking about what he's going to have for lunch, when the next full moon is and what the Earth is going to look like in the next 5 years. 😂🌠🌙 What would you say he's thinking about with that smirking expression? #lizard #naturecapture #wildlifephotography #brazil #buzios #canonphotography