When most people think of vultures, they envisage giant, feathered, dirty scavengers, the characters from the Lion King hanging around on the branch without really contributing much, and big scary birds to be afraid of. But vultures are in fact hugely important to a healthy ecosystem, and keep everything in balance in the natural world. Today is International Vulture Awareness Day, which is a day to understand and share the plight of these ancient creatures that frankly, the world would be a very different place without.

What actually are vultures?

Vultures are birds of prey that can actually be split up into a total of 23 different species, and each have their own unique role to play within an ecosystem, which they are specially adapted for. In fact, at least one type of vulture can be found on every continent except Australia and Antarctica. Primarily, they can be split into two types, the New World vultures, which include the Andean condors and are found in the Americas and Caribbean, and the Old World vultures, which are those that can be seen around carcasses in Africa. For this article, we are going to focus mainly on the Old World vultures.

Known as ‘nature’s garbage collectors’, these birds are classed as scavengers because they often eat the leftover parts of carcasses that have been discarded after the initial predators have eaten the main parts of meat, or the parts that other animals are unable to digest. 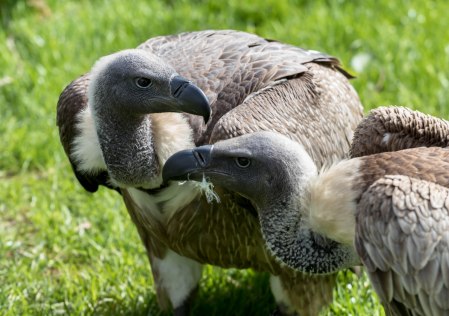 Why do they get a bad name?

Due to their scavenging nature, vultures have been given a bad name, both when seen by tourists in the wild, by the media and in fiction films. People have the perception of scavengers scrounging from others who have made huge efforts to get their kill, instead of finding their own food. But the truth is, vultures often indulge in the parts of the carcass that would otherwise be left to rot, meaning that diseases would be spread, and frankly, the wild would be a very messy place. According to the IVAD website, studies have shown that in areas that contain no vultures, carcasses can take up to four times longer to decompose, which means a much higher spread of diseases in wild and domestic animals, which can be further spread to humans.

Another reason why they get a bad name is because it has been commonly said that vultures circle above a dying animal, waiting to feed. This is a myth. Whilst it is true that vultures can be seen circling in the sky, what they are actually doing is catching thermals which helps them to stay in the air whilst they look for food using their incredible sense of sight or smell. 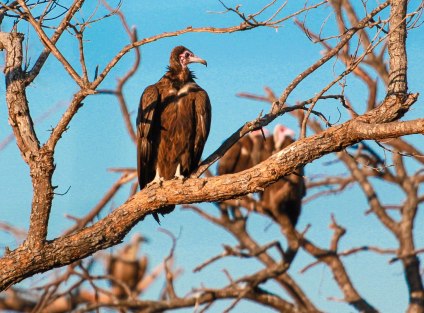 Why are they so important?

Although vultures prefer to eat fresh meat, they are still able to consume rotting carcasses due to their strong stomach acid which kills any bacteria from the carcass that would be toxic to other animals. In this way, they are crucial to an ecosystem because they prevent the spread of diseases to many other animals.

When you look at vultures, you will also notice that despite their huge feathers, their head and neck is completely clear of any feathers at all. This is a special adaptation which means that any bacteria or parasites from the rotting carcass cannot latch on to the vultures, which therefore stops any infections.

How are they under threat?

Perhaps lesser known than the plight of rhinos, tigers and elephants, vultures are also severely under threat for many different reasons. Out of the 23 species of vulture, 14 of those are currently considered to be either threatened or endangered.

One of the factors that aid hugely in their decline is the act of poacher poisoning. This is done in a few different ways depending on the desired outcome. One way is not targeted directly to vultures at all, but can result in a huge number of bird deaths. This involves poachers poisoning an elephant with a dart, for example, which will eventually kill it. Not only is this devastating due to the loss of an elephant, but it also means the death of any other animal that feeds on that carcass, which is now poisoned throughout. Just one elephant that has been killed by dart poisoning could then unintentionally cause the death of a large number of lions, hyenas, leopards and vultures. Furthermore, as many species of vultures work on a single carcass together, this one elephant poisoning could cause the death of hundreds of vultures.

Another way that vultures are poisoned is one that is specifically targeted at killing them. Due to the huge illegal wildlife trade in rhino horn and elephant ivory, there are many carcasses for the vultures to feed on. However, as the vultures are seen locating the carcass in the sky before swooping down to have their meal, these sights of huge numbers of vultures above a carcass are a key signal for the authorities to find the carcass quickly, and be on the tracks of the poachers. As poachers do not want an increased chance of being caught, they purposely poison the carcasses, causing vulture populations to severely decline.

A further factor that causes the decline of vulture populations is ancient traditions in certain cultures that use various parts of a vulture for medicines, of which 29% of vulture deaths are attributed to. In some cases, individuals will use the eyes of a vulture, as they believe that this helps them see into the future due to the impeccable eyesight of the birds, whilst in other cases they will smoke the vulture brains, as they believe this will bring them good luck.

What can you do?

As always, the best thing that you can do is spread awareness on the issues surrounding the drastic declines in vulture populations around the world. The majority of people will not know about their decline, or about why it is so important for us to protect them. The main reason why the drastic decline of vultures is so devastating is because the loss of vultures will also lead to the loss of many other species.

In addition, you can support and donate to organisations that work to protect vultures in the wild, including monitoring their numbers and reducing their threats. These include VulPro, 4Vultures, Tusk, and BirdLife.