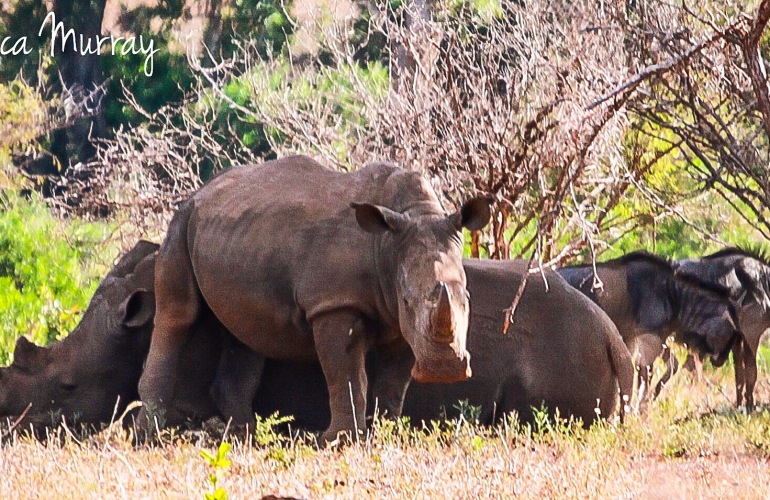 This week celebrated World Rhino Day, which is all about spreading awareness about the rapidly depleting rhino population!

As we walked into the debate we were asked to anonymously vote whether we were for or against the legalisation of the trade before we filtered through to our seats, and then once more at the end to see if our views had changed. So I am going to ask you now to decide in your head whether you are for or against the trade, and let me know at the end if that opinion has changed.

John Hume made the argument that it does not harm the rhino to remove his horn, and this we know to be true, as it is made of keratin – the same thing that forms our hair and nails. He also made the argument that rhino horn grows back, just as our hair and nails do, and therefore what is the problem?
If only life were so simple. Sadly, one of the main problems is corruption in this world, meaning that the trade will not be accurately controlled and regulated. In my opinion, the only way that legalising the rhino horn trade would really work is if there was no corruption, and therefore no poachers. Because, like most things, poaching is a business, and if the market value of legal rhino horn is 20,000, there will always be poachers who will sell it illegally for 17,000, and as Will Travers commented, these “businessmen” will always take advantage of any opportunity to make money.
Whilst John Hume said that legalising rhino horn will decrease poachers, which I do not doubt, I strongly believe that it will not eliminate them. There will always be those who want to make quick money, and don’t care who they kill to get it.

Alongside this, and perhaps the point that riles me the most, is that surely by legalising the trade we are saying that it is okay to buy rhino horn?

John Hume maintained the opinion that it does not matter if we believe it to have magical powers or not, and we should let the Asian market believe what they believe, as legalising it will decrease the illegal poaching. But why would we give our approval to an animal product that takes away from that individual and only ceases to create the same thing that we would get from biting our nails, instead of disproving these old ancient medicinal uses and beliefs so that they can be stopped?

The other issue is that I believe that legalising the trade will then lead to an increased demand, as it did when the elephant ivory trade was legalised to sell to China for a certain period of time.

John Hume suggested that if we sold 6-8 tonnes of rhino horn per year then it would be sustainable, as that is more than what is being poached now. But, with an increased demand as people are taught and shown that buying rhino horn is a perfectly okay thing to do, the stockpiles that were once seen as sustainable for decades, suddenly find themselves depleting at an alarming rate.

This increased demand for rhino horn will commence when it becomes readily available, and opens up an entire imagination of possibilities of what can be made from it.

If people can make money from it, they will, and before we know it we will have shampoo made from rhino horn.

If this sounds crazy to you, let me tell you a quick story of the legalisation of another vile animal trade. Bear bile.

The bear bile trade is an industry that has been going on for decades, these bears are kept in captivity to harvest their bile, which is used in traditional Chinese medicine. Once this trade was legalised, bear bile products suddenly began to emerge, such as bear bile toothpaste, eye-drops, throat lozenges, tea and even wine – with the estimated value of these bear bile products at $2 billion!

If we believe that rhino horn has absolutely zero positive impact to any other living thing except the rhino to which it originally belongs, then why on earth would we legalise this trade?

As with everything in conservation, it is my view that education is the only thing that will truly save the natural world, with particular emphasis on educating the younger generations; our future conservationists, so that they may grow up with the imprinted knowledge of conservation efforts in a constructive way.

We should not legalise rhino horn because then our children will grow up to believe that it is acceptable to buy and sell rhino horn; as it is not only legal, but readily available. And why wouldn’t they if they have grown up in a world which tells them that it is legal, why would they question the laws of the world unless they are educated on the truth behind the trade?

In conjunction with this week’s International Peace day, there is always something that everyone can do, no matter how big or small.

Everyone seems to think that it is not their problem or they cannot do anything, but there is always something and we need to unite to fight this terrible war against poaching.

Here is a short list of what YOU can do:

– Educate. Educate everyone that you can. Family, friends, and social media followers

– Raise money for rhino projects
As John Hume said, even if the rhino horn trade was legalised, ‘we will still have poaching’.
We should not legalise a trade that will teach future generations that it is okay to take a part of an animal from them to use for make-believe medicine and souvenirs.

That is not a world that I want to live in…do you?

4 thoughts on “Rhino horn trade – for or against?”