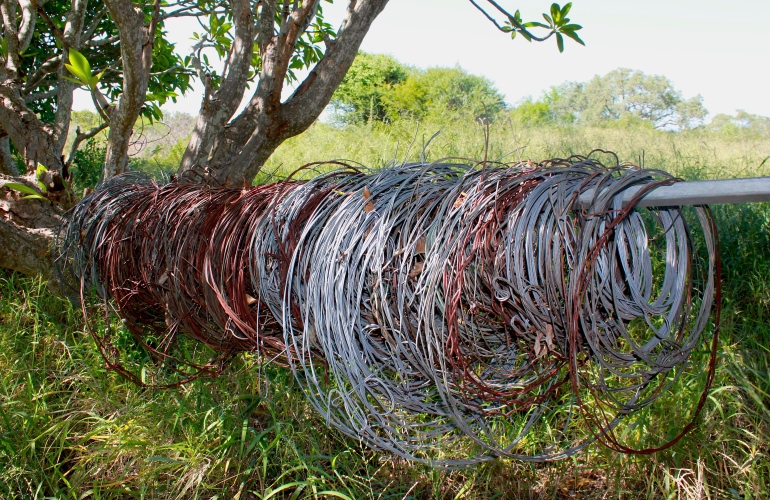 This is  a collection of all of the snares that have been found on the Mbube reserve of the White Lion Protection Trust, where I am currently situated.

Snares, made by looped wire, are used mainly by meat hunters in South Africa, and have been said to be amongst the highest killers of wildlife in Africa.

Armed with this simple, cheap and lightweight trap, poachers will cut or mount the electric fences to get onto the reserve, and then set these metal wires on game paths or around waterholes where animals are more than likely to get caught.

The cable noose is attached to a tree, at the height of the desired animal’s neck so that they are sure to get stuck. The more that the animal instinctively struggles with this alien material around its neck, the deeper the wire impales into the flesh.

They are used mostly to catch bushmeat to feed rural communities who have a fast-growing population and a high poverty level. Although illegal, some see this as merely the work of a man trying to feed his family through the only means available. However, a staggering 90% of animals caught in snares are left to rot, resulting in a dire impact on prey numbers which of course has a knock-on effect for the predators of the bush too.

As snaring is mainly of antelope, it is not publicised as much as rhino or elephant poaching but it is just as crucial. Snaring has been seen to be one of the biggest factors contributing to the extinction of species and we must realise that everything in the natural world is bound together and as we lose one species, we progressively lose many more.

Let’s give a huge thank you to the anti-poaching guys who have spent many hours everyday searching for snares, and preventing the unnecessary deaths of our beautiful creatures.

- VIDEO TEASER -🦗
- VIDEO TEASER -
Before exploring new food sources, it's important to first understand WHY we need to discover new food sources and ways of producing our food. I hope this helps! 🌿🙏🏽
What do a real estate adviser, a gospel rapper, a yoga teacher, a founding editor and a recruitment consultant all have in common?
This weekend I had a massive clear out - it took way longer than I thought but I discovered so many things that I had forgotten about - forgotten I'd been through, forgotten I'd achieved and forgotten I'd experienced.
I was thinking about writing a truly deep, profound caption for these photos, powered by a sense of spirituality and the universe. About finding joy and light in every moment. About finding our purpose through spreading light to others.