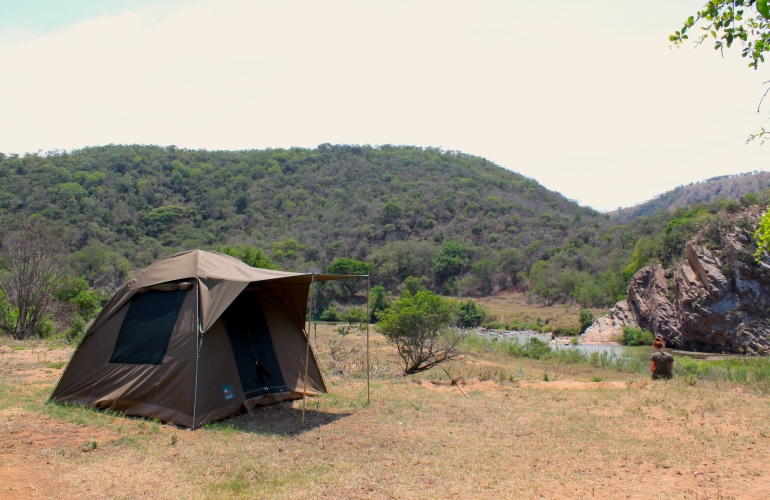 There is no other feeling in this world quite like falling asleep in a tent to the creaks and croaks of frogs and toads, watching the milkyway through your mesh window, knowing that there is the most dangerous animal in the world grazing right outside the zipper of your khaki home. True african bliss.

7am we embark on our first practical. A two and a half hour drive north to Ebandla Camp in the true bush of Amukuzi Game Reserve.

We arrived excited at the tranquil camp, which was ten times better than anything I could have visualised. Personal tents looking out to panoramic views of rocky mountains, towering above a crocodile invested river shimmering in the afternoon’s sunrays, rock pools to bask in the sun, wonderfully diverse trees, plants and flowers, mind-blowingly fascinating creepy crawlies, monkeys swinging above my head, and best of all, no fences, anywhere. 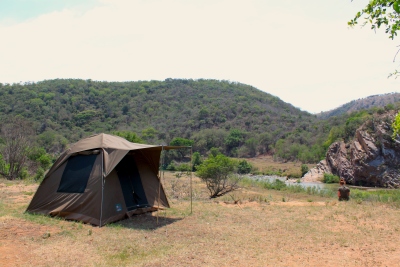 Within 20 minutes of our primary game drive we encounter a herd of 12 elephants, my heaven. As we sit at peace to watch the ellies in their natural environment another eight elephants join the herd, including six young calves. To sit in silence and observe a herd of elephants, to focus on the giant’s mannerisms, tender touches and super interesting interactions just puts you in a state of pure peace. 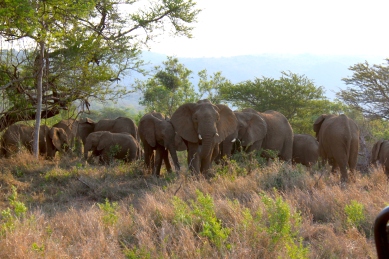 You wouldn’t believe unless you’ve personally observed, but the weight of a four-tonne elephant can sneak up a metre away from you without you hearing a single ruffle, and that is exactly what happened whilst observing the herd. A huge bull walked straight past our vehicle from behind to harass the females we were observing up ahead. And we didn’t hear a single thing, incredible. 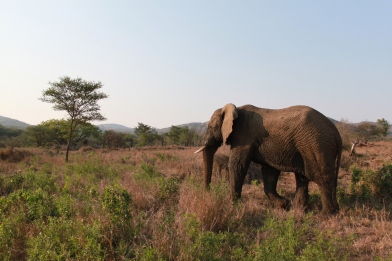 Third day in and my hand jumps to the sun when asked who wants to be on the tracker seat for the next game drive. For those who don’t know, many game viewer vehicles have what is called a tracker seat, which is essentially a seat on the bonnet of the car to enable that person to see the tracks of the animals before the car’s wheels destroy them. I sat on that seat as we revved up hills and slid down slopes, I stretched my feet out as we bounced through the rocky river, and burst with happiness as we suddenly halt 5 metres away from two male cheetahs. 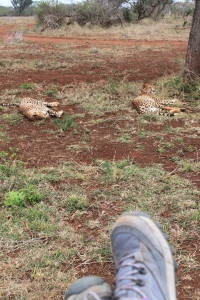 Night watch was one of the things that I was most excited about. Guarding a camp on a game reserve with no fences separating us, herds of gentle giants, raging rhinos, nocturnal leopards and fierce felines to name a tiny amount of countless species that were lurking anywhere in the reserve that we were a part of. 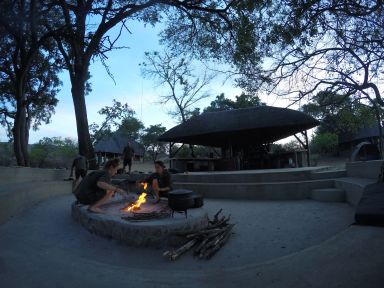 Earlier in the day we got word that a herd of elephants were heading towards our camp. Of course my mind races to all sorts of possible situations that I could find myself in that night, guarding my camp from the giants together with the incredible possibility of watching the dusty beauties at night sets my heart on fire.

But when you’re woken up at 3am, sleep deprived, disorientated, manning the fire, keeping the kettles boiling, fighting the moths and beetles, naturally the game changes.

When your eyesight is taken away due to the pitch black dead of night, your other senses and therefore your reactions are heightened for sure.

Crouching by the fire my head whips around as I hear branches breaking. It’s the elephants, it’s definitely elephants. I see a faint light which is unquestionably the elephants’ eyes reflecting back at me, as all animal’s do in the dark of the night. My only uncalled for reaction at the time was to plunge my hand into burning coals. Why? I honestly cannot tell you. Jumping up and down sucking my poor flaming finger, it was genuinely the scene from Pinocchio when the wooden boy first discovers a flame, same finger even. My reaction was uncalled for because the “elephants’ eyes” was in fact one of the other students heading to the toilet with his headlight. No worries though, after three days of pain and the burn filling with sticky liquid, my tent-mate Leno performed my first bush operation… 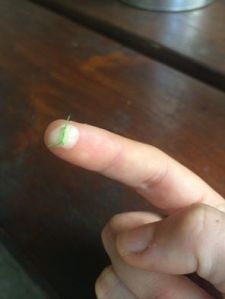 My second night watch was a different story though. Shining my torch, tired eyes drooping, suddenly I light up two hippos to my left, two buffalos to my right, and a crocodile straight ahead! There is no other adrenaline rush like that of being within metres of wild animals, in the pitch black of the night, nothing to separate you and, although slim chances, nothing to stop that animal from killing you. That feeling is an incredible one, because now we rely on too many things to “protect” us, when truly we really can live as one. 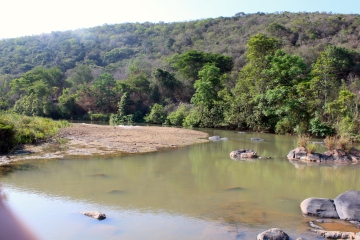 To live as one with nature is my favourite feeling and one that I hope I can continue to experience for the entirety of my life, and I wish that for you as well.

No borders, no fences, no gates, no worries, no distractions, no judgement.

Alan Watts said: “If you go off into a far, far forest and get very quiet, you’ll come to understand that you’re connected with everything.” 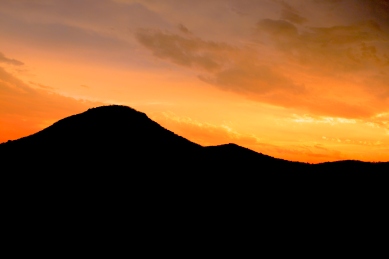 Should we be feeding our pets an insect-based diet?
I know what you might be thinking - with all of these posts I'm sharing with you about how great eating insects could be, why is it that we're not already eating insects if they're so great? Here's why...🐜
- VIDEO TEASER - 🐛
Prepping your dinner?
🎉💫❤️🙏🏽🎊 Insect Project interlude for some birthday reflections! 🎊🙏🏽❤️💫🎉
We now know that our diets need to change, we need to re-examine what we're eating, regain our connection with our food and rediscover what's actually going into the food that we're putting into our bodies.🐛